“The BRAIN Initiative aims to revolutionize our understanding of the brain and brain disorders,” said Dr. Collins. “We welcome Dr. Ngai’s leadership in steering this groundbreaking 21st century project.” 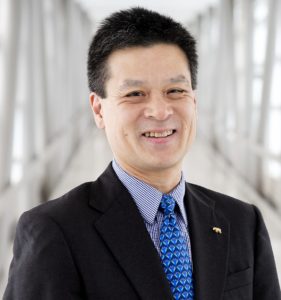 The NIH BRAIN Initiative is a large-scale effort to accelerate neuroscience. Since it was launched in 2013, the initiative has funded hundreds of research projects that have led to several breakthroughs, including the creation of a self-tuning brain implant that could help treat Parkinson’s disease patients, the development of a computer program that can mimic natural speech from people’s brain signals and the construction of a brain cell inventory. BRAIN funded researchers have also shown the ability to make high-speed, high-resolution, 3D films of a nervous system in action.

“Recent technological and scientific advances are transforming our understanding of the brain,” said Dr. Ngai, who is currently the Coates Family Professor of Neuroscience at the University of California, Berkeley. “I am deeply inspired by these advances and look forward to my new role in enabling BRAIN Initiative investigators to unlock the secrets of the brain and lay new foundations for treating human brain disorders.”

Dr. Ngai will oversee the long-term strategy and day-to-day operations of the initiative as it takes on the challenges of the next five year plan, just announced a few months ago. Congress has enthusiastically supported BRAIN through the appropriations process and the 21st Century Cures Act.

“Dr. Ngai’s appointment marks a new chapter in the BRAIN Initiative,” said Walter J. Koroshetz, M.D., director of NIH’s National Institute of Neurological Disorders and Stroke. “He will provide the initiative the clear vision the project needs to navigate through this critical period.”

Dr. Ngai earned his bachelor’s degree in chemistry and biology from Pomona College, Claremont, California, and Ph.D. in biology from the California Institute of Technology (Caltech) in Pasadena. He was a postdoctoral researcher at Caltech and at the Columbia University College of Physicians and Surgeons before starting his faculty position at the University of California at Berkeley.

During more than 25 years as a Berkeley faculty member, Dr. Ngai has trained 20 undergraduate students, 24 graduate students and 15 postdoctoral fellows in addition to teaching well over 1,000 students in the classroom. His lab uses a wide array of tools and techniques to study the cells and molecules behind olfaction, or the sense of smell, including fundamental research on how the nervous system detects odors and turns them into neural signals sent to the brain. Dr. Ngai is also interested in unraveling the diversity of cell types in the brain and understanding how the nervous system repairs itself following injury or degeneration. His work has led to the publication of more than 70 scientific articles in some of the field’s most prestigious journals and 10 U.S. and international patents. Dr. Ngai has received many awards including from the Sloan Foundation, Pew Charitable Trusts, and McKnight Endowment Fund for Neuroscience.

As a faculty member, Dr. Ngai has served as the director of Berkeley’s Neuroscience Graduate Program and Helen Wills Neuroscience Institute. He has also provided extensive service on NIH study sections, councils and steering groups, including as previous co-chair of the NIH BRAIN Initiative Cell Census Consortium Steering Group.

“Dr. Ngai has the diverse skills and experience that are needed to build on the early successes of the BRAIN Initiative,” said Joshua A. Gordon, M.D., Ph.D., director of NIH’s National Institute of Mental Health. “We are tremendously grateful that we were able to recruit him for such an important leadership position.”

About the National Institutes of Health (NIH): NIH, the nation’s medical research agency, includes 27 Institutes and Centers and is a component of the U.S. Department of Health and Human Services. NIH is the primary federal agency conducting and supporting basic, clinical, and translational medical research, and is investigating the causes, treatments, and cures for both common and rare diseases. For more information about NIH and its programs, visit www.nih.gov.

On International Overdose Awareness Day, the U.S. Department of Health and Human Services (HHS) through the Substance Abuse and Mental Health Services Administration (SAMHSA) is announcing the awarding of $79.1 […]

Jarod Stern, Senior Managing Director at Savills, has recently been approved to join the Mental Health News Education (MHNE) Board of Directors. Debra Pantin, CEO of Outreach and MHNE Board […]

Law enforcement seizures of pills containing illicit fentanyl increased dramatically between January 2018 and December 2021, according to a new study. The number of individual pills seized by law enforcement […]